The Skyline was Really Somethin’ in those Days Simone de Beauvoir, the French novelist and feminist philosopher, visited New York City post-WWII. At night she discussed politics at parties with tipsy and testy American intellectuals. During the day, she gave her hosts the slip and made day trips around the city. This diary snapshot? So stark it hurts.

The sun is so beautiful, the waters of the Hudson so green that I take the boat that brings midwestern tourists to the Statue of Liberty. But I don’t get out at the little island that looks like a small fort. I just want to see a view of [sic] Battery as I’ve so often seen it in the movies. I do see it. In the distance, its towers seem fragile. They rest so precisely on their vertical lines that the slightest shudder would knock them down like a house of cards. When the boat draws closer, their foundations seem firmer, but the fall line remains indelibly traced. What a field day a bomber would have!

We Must Go Down to the Sea Again

The old South Street Seaport Museum had been taking on water for two decades before it got a powerful new patron.  Last fall, The Museum of the City of New York signed a yearlong contract (up this October) donating expertise and exhibits  with the hopes of turning around the Seaport’s fortunes.

Its future is uncertain: A shame because it now boasts two new floors of remodeled galleries showcasing such gems as vintage nautical tools, bottled ships, a stunning sense-around recreation of pre-European New York and demonstrations of atlier art from textiles to tattooing. It’s also child friendly. (Where were these places when I had a toddler?) Will it live, will it die, dwell in limbo? It depends, in large part,  upon public support. So, to-arms, New Yorkers, and march to the main! 12 Fulton Street. Directly across from the Bodies exhibit.

Incidentally, I had the pleasure of speaking there (Seaport Museum) as a part of its nascent lecture series. My favorite  question of the evening was a variant of the  standard “Which of your diarists would you most like to have as a dinner companion?” (Or words to that effect.)  In this case, “With whom would you like to knock about New York for a day? ” No contest: John Sloan,   artist and illustrator of the rabble-rousing Ashcan School. During the early 1900’s, Sloan painted washerwomen instead of heiresses.  The result; incomparable beauty. He was also a wit.

The following is a  snippet of his entry chronicling the Vanderbilt Cup Race of 1906:

…. An hour’s ride.…to Westbury, L.I. Here the roads were crowded in the foggy night with an army all bound one way… autos so thick we had to pick our way through them….dawn commenced…and unveiled the crowds. We found a place to stand, the start came at 6:15 a.m. Each car came up sputtering flame and firing broadsides – leaping away. After we had seen the start we walked along the course toward Jericho turn. Amusing incidents all along the road. Now and again the shout “Car Coming!!” The foolish people thronged the road ahead of the cars leaping back just in time to save their craning necks. Such speed I never saw to this day. No doubt the future has greater speed in store for those who then will be alive. The French drivers are wonderful though the fastest “lap” was made by Tracy, an American. Wagner won the cup for France. One spectator was killed by Shepard’s car, one out of 250,000 is not a great percentage when the foolhardiness of thousands is taken into consideration.

There is rare film footage of the race on YouTube 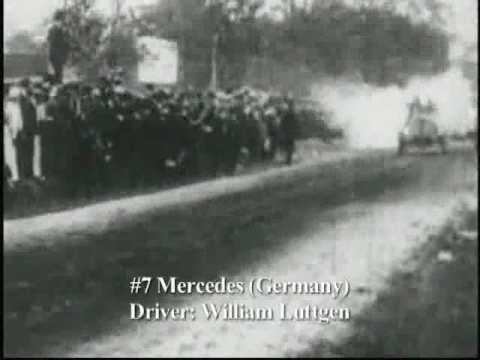