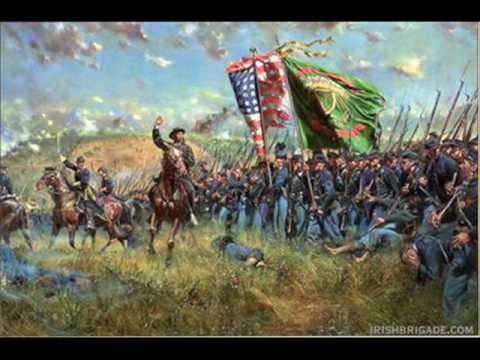 YouTube is, among other things, an excellent source for photo research. Not long ago I was scanning Civil War songs looking for a series of prints illustrating Sherman’s March to the Sea. (I found them on PrinceChaloner’s “Marching Through Georgia.”) In the process, I came across another Union tune that raised some curious issues. “We’ll Fight for Uncle Sam.”

It’s a feisty ballad about one Paddy Kearney who enlists in New York’s 69th to fight the rebels. Straight out of the gate he proclaims himself a “modern hero,” a perception contrary to the one many New Yorkers held of the Irish prior to the outbreak of Civil War. The Irish had arrived in waves after the potato famine. Their sheer numbers and the fact that they were Catholic (the vast majority of previous comers were Protestant) branded them outcasts. “No Irish Need Apply” was posted unapogetically on the windows of shops and restaurants about town.

The Irish formed a volunteer “militia” ostensibly to keep the peace but meant more generally to protect Irish interests. One of these units was “Corcoran’s Brigade.” It was led by one Michael Corcoran whose ulterior purpose may have been to recruit and train Irish riflemen in the U.S. for a war against Great Britain. But there was another geopolitical force at play. In the early days of the Civil War, Britain was seriously considering throwing its weight on the side of the Confederacy in order to co-opt the profitable cotton trade. So joining forces with the North was Corcoran’s way of sticking it to John Bull.

“The Irish Brigade” was para-military rather than regular army, but the distinction blurred when Corcoran refused to parade his men past the visiting Prince of Wales. For this, he was court-martialed, but before he could be tried, The Civil War broke out and in 1860 the Brigade was mobilized and later mustered into the Union forces. The North could not afford to lose the fighting ability of the notoriously combative Irish.

The 69th won renown for its courage under fire and it suffered staggering losses. At the First Battle of Bull Run, it successfully defended the U.S. capital against on-coming Confederates. During the Battle of Antietam, it held the Confederates at bay giving Union troops time to break the Seccessh line. The Irish Brigade suffered a casualty rate of sixty percent. During the Battle of Fredericksburg Its remaining 1,600 men dwindled to 256. Lee himself reportedly bestowed upon the brigade the grudging title of “The Fighting 69th”. The undermanned brigade fought on to Chancellorville suffering yet more casualties. It put its wounded back in the lines for the battle of Gettysburg where the casualties took their final toll. The Irish volunteers still standing were folded into two other existing brigades.

“We’ll Fight For Uncle Sam”, sung here by folk artist, David Kincaid, is the work of an anonymous lyricist set to the tune of an Irish drinking song, “Whiskey in a Jar.” Not a march per se, it was probably sung more often in dance halls and around regimental camp fires.

Note: “Give him Ballyhooly” seems to be an all purpose insult; Ballyhooly being a hot, humid town near Cork considered by the Irish to be the most miserable spot on earth.

Note: The song apparently emerged at the start of the war, circa 1860, but the last verse, referring to General George “Little Mac” McClellan had to have been added later since McClellan was removed of his command by Lincoln in 1963.